skip to main | skip to sidebar

We’ve had the benefit of the teachings of Greg Derrett here this past weekend and it has certainly been an eye opener for many of us. To be honest I was surprised more agility people did not take advantage of the unlimited auditing. Everyone has their own ideas I suppose. Anyway the four seminars started on Thursday evening and ran through to Saturday morning. Thursday, Friday evening and Saturday morning all dealt with the younger dogs who were just ready to start competing or had been competing not too long. Then Friday morning was for the Advanced Masters dogs.

Before I launch into a blow by blow account of the four workshops I must make comment upon context. I truly believe that the type of agility competition a country has, the equipment that is used and the rules that are in place has a major impact on the training priorities of your average competitor. is not a hugely populated country like the , the sport, whilst it is growing fast has nowhere near the numbers competing that it has in . The rule that you must win in order to advance to the next level brings a whole different perspective into your approach to the sport. I can honestly say that I am glad that here in you do not have to win to advance in the sport. For our sport I believe that would certainly mean we would lose motivation for many of our weekend warriors who set personal goals to progress higher and I think we would see the growth in our sport stagnate.

Should every handler expect to be able to put an Agility Champion on their dog or to win a National final? No, absolutely not. Should every handler be allowed to progress if they have trained and practiced enough to become proficient in running a course clear? Definitely. Agility, ultimately, is a way of having fun, spending time with your dogs and friends and challenging yourself to be a good trainer and handler. Do I want to win? Absolutely, not many people out there who have competitive dogs would say no to that question no matter how much it is not openly talked about! The question becomes then how far am I prepared to go to win? Do I want to go into 98% of my trials in a year and train my contacts so for those 2% of trials of big events I know that I have trained everything to the nth degree and have a much better chance of winning. Let’s face it no matter how much you train (even if I reinforced my contacts for 54 out of 55 trials in the year and do a quick release on that all important big event at the 55th trial) there can only be one winner and we are talking about dogs here, they may just take an extra unnecessary stride somewhere, they might tip a bar etc. I think it would be incredibly demotivating for the handler to approach their trialling career in this way. What makes running agility so much fun and addictive? That feeling you get when you have run a course in the smoothest way possible and you go clear. It doesn’t happen often but when it does it’s like a tonic that keeps you aspiring for more.

99% of most errors on course are handler caused; a simple fact that will hold up under strenuous analysis I’m sure, not forgetting that not only mistakes whilst running the course are handlers’ fault but if their dog is unable to perform a particular skill then there is a gap in the dog’s training therefore handler caused! There are times here when long term, committed handlers go into the ring and have a very specific goal in mind for that run that has nothing to do with running clear and more to do with a specific issue they’ve had in training or trialling. I admit to doing it myself on several occasions when something has become enough of a torture for me to blow off the entry fee and chance of a card and/or win and purely concentrate on reaching that goal of a reinforcing the rock solid start, or that goal of holding contact position, or that goal of independent weaves etc etc. Would I enjoy doing that almost all year round just so I improved my odds when it came to Nationals time? Would that one win in a National final be enough of a reward for me to keep my motivation and enthusiasm in tact for the rest of the year till the next National? The answer is of course a resounding no.

Our Nationals have been running since 2001 and whilst it certainly is the most prestigious event on the agility calendar year in terms of the best dogs in the country run there, it doesn’t determine who goes to a World Championships, it doesn’t lead to a chance to compete at Crufts or at the IFCS Nationals or even the USDAA Worlds Grand Prix. The following weekend or two weekends later you’ll still be back at your local grounds competing with the same dogs and same handlers weekend in and weekend out….and you will still be striving for that nice smooth clean run. So why lessen your overall enjoyment of your chosen sport just to ensure that you have the best possible chance to win a National. It would seem somewhat self defeating to have this attitude. I try and make sure that I budget so that I can enter as many runs as possible at each trial, then if I think I need to, I can use a couple of runs to focus on a particular skill. The rest of my runs I try for that rare, smooth, clean run. I have tried using an entire trial as training runs, and whilst I felt some satisfaction by the end of the night that the skill I was working on is more proficient because of it I still felt somewhat hollowed by it all, like I was depriving myself (and therefore no doubt, my dogs, who always are a reflection of their handler, felt something similar).

What has all this got to do with Greg Derrett you may be wondering if you have hung on this far. Well I think like all presenters you must examine the context they come from and make careful decisions about what aspects of that context apply to you. If speed is the number 1 priority because you have to ‘win out’ of a class, everything you do from day 1 of bringing that puppy home is geared towards that. If you have non-typical agility breed and you don’t have to win out but you would still like to progress through the ranks then maybe speed is an equal priority to other things like teaching weaves or contacts, you might be teaching obstacles in that case a little earlier than the trainer who has a dog who is likely to have the drive and intensity to work plus the structure to be a top world competitor. Maybe you have spent 18 months training your dog and whilst they are not at their maximum speed yet or perhaps not got the perfect contact behaviour happening yet you know they are proficient enough to get round a course with you without any problems. I don’t see any harm in competing in Novice even though your dog is not trained up to a Masters level. It becomes an issue if you do more trial runs than training runs and so therefore you are not reinforcing behaviours on the ring since you are trying to run clear (no tug toy or food). That is when your behaviours will start to fall apart. As long as your non-reinforced runs are severely outweighed by the reinforced runs there should not be a problem with competing early. This of course means more than a one night a week commitment to training then and that’s where the pet dog (ie they had a pet dog and decided to take up agility with it) weekend warriors may come unstuck in the higher levels.

Well, I have just been pointed at your blog and read this post. Hello from San Jose, CA. This is quite interesting in light of the opinion of at least a couple of british seminarists that having "Qs" rather than "wins" is the worst thing that happened to everyone except the top handlers--who will win no matter what.

In their opinion, if you know you can't win, it's not a DEmotivator, but rather either a motivator to improve yourself or to compete amongst your friends, or else a huge endorsement of the fact that agility is for fun--if you have no hopes of winning with your dog and your style, you're truly competing for the joy of it and as a result even inexperienced handlers and nondriven dogs do better because there's no stress, there's no "NO!" or other unintentional negatives on course to keep dogs off of wrong obstacles, there's no trying and trying and trying to do an obstacle or sequence in competition that you're not getting because failure to do it means no Q--people will just go on and finish the course to have fun, and they'll always push themselves to do the best that they and their dog can do (not the closest they can come to meeting the minimum requirements) and then go home and work on whatever they need or want to work on.

Since the U.S. agility has always had Qs to advance, not wins, I can't speak knowledgeably about an entire Qless environment. The closest thing we have to this is Masters Snooker in USDAA agility, where to earn your championship you must place in the top 15% at least 3 times in that class. As a result, the competition in that class is something fierce. But it is also a lot of fun for many people BECAUSE they know that they have to stretch themselves and try things that they wouldn't normally try, and when they succeed, it's such a blast. On the other hand, for those who never ever will manage to be in the top 15% even once, let alone 3 times--I've never seen anyone quit Masters agility because they'll never earn their championship. They keep competing in Snooker & everything else and presumably it's because it's fun.

Still--if I were to be stuck in Novice forever because I couldn't ever win, I don't know that I'd enjoy that. But then, I'm a competitive person and would be likely to strive for those wins. And I've been lucky with all 4 of my dogs and have actually HAD wins at the novice level and intermediate levels as we moved along. It's only at the masters level that I've almost never managed a win--but now I'm here, aren't I, so I'm not left behind! 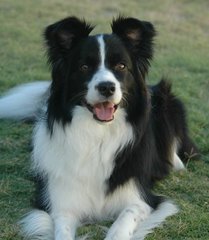 Raven - the source of my agility addiction, a 9 years young superfast cancer surviving BC 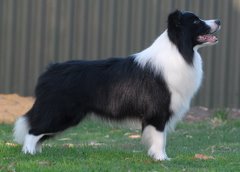 Cypher - 4 year old tug-a-holic male BC, and proud of it! 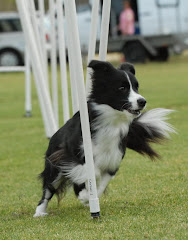 Spryte - a 2 year old girl BC, a wannabe Raven, a gonnabe agility addict!